What Is World AIDS Day? 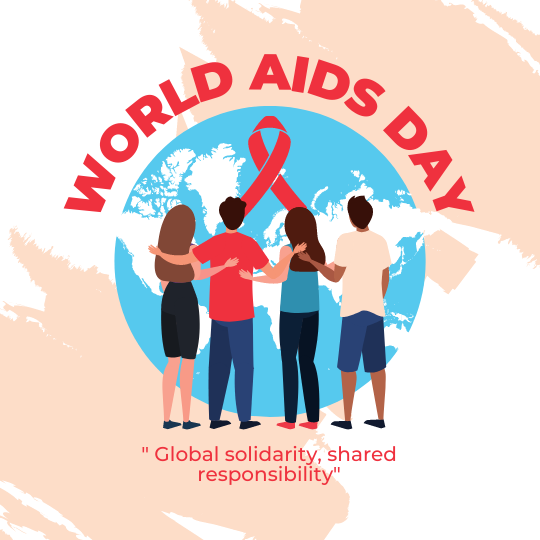 World AIDS Day on December 1 offers a chance to inspire people to work together globally to remove the disparities and inequities that obstruct HIV testing, prevention, and access to care; to show support for those who are living with HIV; and to remember those who have passed away from an AIDS-related illness. World AIDS Day was first commemorated in 1988.

You can contribute to the World AIDS Day commemoration by:

How is HIV different from AIDS?

HIV (human immunodeficiency virus) is a virus that attacks and destroys the immune cells of the body causing a person more vulnerable to other infections and diseases. AIDS (acquired immunodeficiency syndrome) is the result of HIV infection after the body's immune system has been badly damaged.

The human body can't get rid of the virus itself and it has no cure yet. Once you get it, you have it for life. However, there are effective medications to stop the progress and prevent its harm to the person's health.

How do you catch HIV?

HIV is spread by contact with certain bodily fluids of an infected person during unprotected sex or by sharing injection drug equipment such as needles.

How do you prevent HIV?

You can prevent HIV infection by:

How do I know if I have HIV?

You can only know your HIV status if you get tested. Ask your healthcare provider for an HIV test, use HIV Service Locator to find your nearest test center, or use an HIV self-testing kit like OraQuick HIV Self-Test.

What are the symptoms of HIV?

In the early stages of HIV infection, you may show mild to chronic signs and symptoms such as:

Does HIV always lead to AIDS (end stage of HIV)?

No. In the United States, most people use HIV medications to stop the progression of HIV infection and they do not develop AIDS.

There are many drugs in different classes prescribed to slow the progression. These include:

However, for those who do not use HIV medication, it typically takes 8 to 10 years for an HIV infection to progress to AIDS.

AIDS is diagnosed in a person with HIV infection when one or more of the following occur:

What are the symptoms of AIDS?

People with AIDS come down with an infection that does not normally affect people with an intact immune system. These infections are called opportunistic infections; their signs and symptoms may include:

What is the life expectancy of people with AIDS?

Is there a way for people affected by HIV to save on their medications?

Save money on your HIV medications with the rxless saving cards. Our free discount card can save you up to 88% on your medications in many pharmacies including CVS, Rite Aid, and Walgreens.