What Should I Know About COPD Awareness Month? 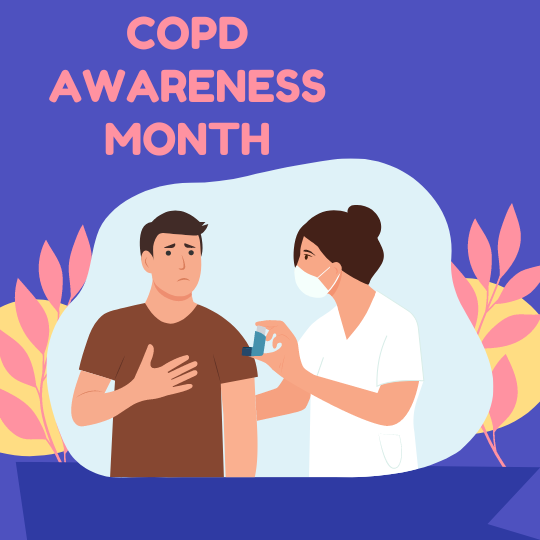 November is dedicated to raising awareness of Chronic Obstructive Pulmonary Disease (COPD). COPD is a chronic lung disease that causes difficulty breathing; it includes chronic bronchitis and emphysema. In COPD, there is an overproduction of mucus, scarring, and narrowing of the airways, which leads to air becoming gradually trapped inside the lungs. At the end of this page, you will learn the basics of COPD, why it's vital to raise its awareness, and how you can get involved.

Why is COPD Awareness Important?

The reasons to raise awareness of COPD include:

Do you know that:

How can I tell if I have COPD?

COPD can be diagnosed with a breathing test called Spirometry even if you don’t have the symptoms.

Is it possible to prevent COPD?

COPD is preventable and the major approach to prevent it is to quit smoking. Active smokers that stop smoking usually observe a progressive slowing of the disease. Other preventive measures are vaccination against the flu and pneumonia.

How is COPD Treated?

Treatment options for COPD involve medications such as antibiotics, bronchodilators, corticosteroids, etc., oxygen, and in some circumstances, lung transplantation or surgical excision. The medications used are:

What are the symptoms and signs of COPD?

The signs and symptoms of COPD include:

What are the Risk Factors of COPD?

Get screened for COPD if you have the following risk factors:

How do I get involved in COPD Awareness Month?